The Wandering Inn Wiki
Register
Don't have an account?
Sign In
Advertisement
in: Groups/Organisations, Goblins, Adventurers,
and 3 more

The Redfang Elite Warriors refers to the band of the thirteen Goblin warriors of the Redfang Tribe sent by Garen to kill Erin. The group consisted of twelve Goblins led by a Hobgoblin.

Seven of them were killed defending Esthelm, while the rest became Hobgoblins.Five of the remaining Redfangs would ironically end up saving Erin. For a while they became bodyguards for her in The Wandering Inn before the group dissolved after the Siege of Liscor, with only three of them remaining alive.

They all had red tattoos that marked their identity. Other Redfang members are able to recognize and tell them apart with ease. These markings need to be occasionally renewed, but otherwise remain unchanged.

This aricle intends to describe the actions of the Elite Warriors as a group, while their individual achievements are detailed in their respective articles.

Garen believed that Erin's presence would impede Rags' progress to become a Goblin Lord,[1], so he secretly sent a band of his elite warriors to kill her. They were a all-male group for the practical reason that mixing a female Warrior into the group could have distracted them and if the mission took too long (which it did) this could be the beginning of a new separate tribe.[2]

The band (12 Goblins and 1 Hobgoblin each of them above level 10 in a combat class) got lost since none of them were particularly bright and none of them had a tracking class.[3]

Additionally, they somehow doubted the legitimacy of Garen's order, and weren't particularly keen in following it. After six days of roaming the landscape and looking for the [Innkeeper] girl, they had a debate and decided that following Garen's orders without Rags knowledge or permission was wrong. In conclusion they went back to their new tribe and tell Rags what Garen had told them to do.

Not knowing where their tribe was, they turned towards Liscor but encountered one of the Goblin Lord's War Bands. They turned and fled to a partially destroyed Human City with the intent to lose their pursuers.[2]

In Esthelm, they encountered an environment like they hadn't seen before: Instead of a united Human force, the survivors of Rags' siege were splintered into infighting scavenger groups that behaved more or less like Goblins. The ruins proved ideal for the Redfang Warriors to find shelter and food, as they had no qualms about eating dead bodies. They ignored most of the Humans who didn't attack them.

Grunter, their leader, intended to survive in Esthelm until it was safe to leave the place; and in the meantime loot valuable equipment and food and also ambush the Goblin Lord's Vanguard Army when they came for the city. Before setting up their camp however, the Warrior group observed a strange girl who was clearly different from the other Humans, as she ate raw Human bodies. They rescued her when she was attacked by a skeleton with a sword, because Headscratcher supposed that the girl might be identical with the Innkeeper of their mission.[4]

The [Florist] girl who had turned into a monstrous Eater form, was still distrought by her fate: She had lost humanity and was renounced and chased by Humans, but still longed to be a part of society. In this situation, she decided to follow the "monsters" who rescued her, and the Redfang Warriors allowed her into their camp, feeding her their cooked, meaty soup and proving to her that they were actually somewhat civilized: They had organized guards, a cooking camp, bedrolls and (albeit rough) table manners - all of which the monster girl had lost. Even so, communication was possible and they all found some basic understanding.[5]

While the Redfang Goblins were somewhat bewildered by that weird Human girl, they even let her follow them around the next day, and she regained some of her mental faculties. The group encountered the Lord's Army Goblins, as well as Toren again, and also the Gold-Rank adventurer Ylawes Byres who easily bested them and grievously wounded Grunter. The [Florist] saved his life by distracting Ylawes, and then helped the Goblins with her medical knowledge: splinting Grunter's arm and removing the bad parasite infestations of Headscratcher and Bugears.

When the Goblin Lord's Army started to storm the (by now organized) palisades of Esthelm, the [Florist] pleaded with them and lead them into a battle against the overwhelming Goblin and Undead forces. In this battle, the Florist was shot down by a Human arrow and later stabbed to death by Toren; while the Redfang Elite Warriors selectively took down the Goblin [Commander], the two remaining Goblin [Shamans] and finally Toren, thus unraveling the Goblin siege of Esthelm by taking out all leadership. Of the 13 Goblins, only six survived this battle however.

Ylawes Byres recognized their efforts and let them go free after they had grieved together for the Florist girl.[6]

Each member of the group had over ten levels in a combat-oriented class. All of them wore armor and carried swords that were neither rusty nor broken.[7]

They were veteran warriors. From their levels alone, they were each a match for any Bronze-rank adventurer. But in terms of experience, they were vastly more competent than any greenhorn with a sword. With a Hobgoblin at their head, the Goblins were more than a match for any unprepared Silver-rank team.[2]

The following five were their best fighters: Badarrow, Headscratcher, Grunter, Bugear, and Rocksoup. The following two were their best trackers: Badarrow and Numbtongue - but since none of them have any tracking classes, they were really mediocre trackers at best before fighting in Esthelm. Especially in descriptions of Volume 2, it was said that none of them were exactly bright, even by Goblin standards.

Among the last 5, Rabbiteater was the only one with [Dangersense].[8]

Most of their equipment was acquired while at Erin's inn.

The group (while their ties would still be strong to each other) was effectively dissolved during the Siege of Liscor: Badarrow and Rabbiteater followed Rags into the mountains and later split up to pursue different tasks, while Numbtongue was revived and brought back to the Wandering Inn.

In order of death, starting by the earliest:

Gallery of the Redfang Team[] 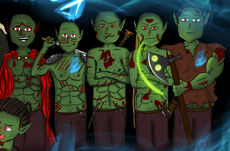 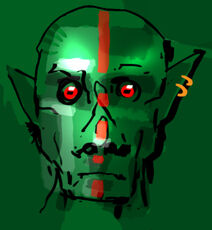 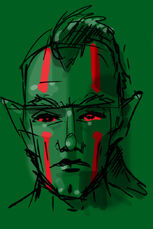 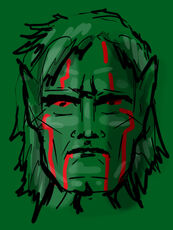 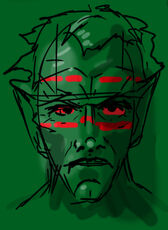 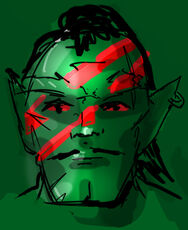 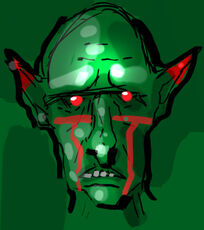 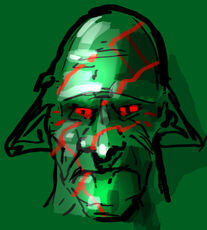 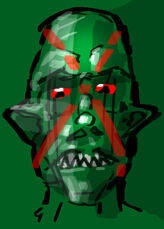