The Wandering Inn Wiki
Register
Don't have an account?
Sign In
Advertisement
in: Characters, Goblins, Hobgoblins,
and 9 more

Chapter 3.29 G (nickname)
Redscar is a Hobgoblin [War Leader] and one of the Redfang warriors. Formerly Garen Redfang's second-in-command, he now serves as Rags' second in the Flooded Waters Tribe.

Redscar was a normal-sized Goblin with a scar over his face.[2] After becoming a Hob, he has grown a little bit taller but still remains the shortest Hob in the Flooded Waters Tribe.[3]

Redscar was the 2nd best fighter in the Redfang tribe, and had a rivalry with Spiderslicer over who was stronger. Halrac believes him to be about as skillful as Yawles. He helps Rags lead the Flooded Waters Tribe from time to time, primarily acting as the leader of the Redfang contingent of them but also occasionally offering advice. As a Redfang, he rides a Carn Wolf named Thunderfur. 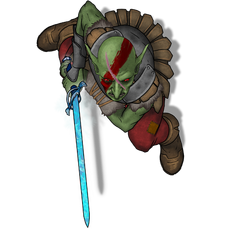 Redsca on foot, by Devin Night (commissioned by Yarrick)