The Wandering Inn Wiki
Register
Don't have an account?
Sign In
Advertisement
in: Characters, Gnolls, Champions,
and 3 more

Chapter 4.24
Regrika Blackpaw, also known as Fortress Blackpaw, was considered a Named Adventurer and a hero of the Gnolls tribes.

She seemed to be a giant of a Gnoll with fur black as coal, and a body armored in splendid golden plate mail.[1]

Regrika appeared a few years before book 4 and had slain incredible monsters single-handedly. She claimed to be a [Champion] and formed a two-person team with another Gold-rank adventurer, the Drake Ikriss.[1]

She entered the city of Liscor, accompanied by a slight young, Gold-rank female [Drake] adventurer, a [Mage] who radiated magical power and who had pale white scales.[1]

It was eventually revealed that in actuality Venitra is Regrika.[2] and that she invented the Regrika persona a few years ago on behest of Az’kerash.[3] 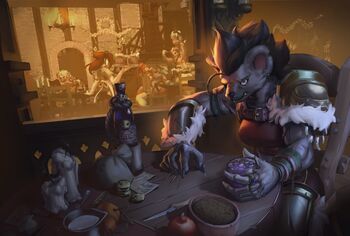