The Wandering Inn Wiki
Register
Don't have an account?
Sign In
Advertisement
in: Characters, Humans, Earthers,
and 4 more

Richard Davenport is a human from Earth who was summoned together with 60 others to Innworld by the Blighted King, hoping that they would be able to defeat their eternal enemies, the Demons.

Richard has dark skin. He’s wearing a helmet,[2] chainmail, a shield, and sword, but carries it all as if it weighs nothing.[1]

Richard is a considerate guy.[1]

Richard Davenport is a young man from Texas.[3] Richard learned how to ride when he grew up on a ranch in Mississippi.[1][4] In the text chat, he revealed that he was a Muslim[4] and named Lord of the Rings as his favorite movie.[5]

Richard was summoned together with about 60 other Earthers by the Blighted King. After their first deadly encounters with monsters, he kept levelling up and was thrust into the role of a leader of the others, which he fulfilled together with Emily, highest levelled [Mage] of the Earther group.[3]

Richard was part of the chatroom discussion, arranged by [BlackMage], under the username of [America Group], representing the people he was summoned with.[5]

He and Emily became an item. While Emily and Tom couldn't stand each other, Richard kept being at least superficially friendly with Tom.[6] This shaky friendship continued even when Tom gave mostly in to his insanity and Richard was one of the few people in the American group who didn't completely avoid Tom.

Lord Hayvon Operland considered Richard as the spokesperson for the Americans, allowing him more liberties in his mansion than the other Earthers and gifting him several powerful magical artifacts.[4]

Richad was with Lord Hayvon as they viewed the raid on the Village of the Dead, and managed to persuade Hayvon, initially dismissive of the raid, to lend his skills to the adventurers.[7] 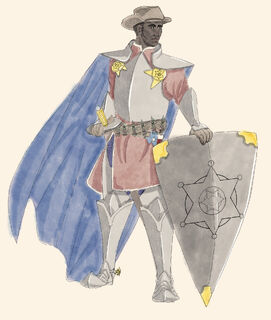