Rock Crabs or as they are officially known as Hollowstone Deceivers, are monsters that can be found in the Floodplains.

Rock Crabs are, as the name implies, crab-looking monsters with an outer shell made of stone. Their shells can be as tall as two persons on top of each other, and with a diameter just as wide.[1]

Besides two claw-like pincers and two dark antennae, probably their eyes, they have "countless" crab-like legs on which they can move quite fast.

Rock Crabs give off a loud clicking when they run, both as they pursue their prey or flee from their enemies. When in distress, they emit a noise like a extremely large cricket, except with a lower frequency, echoing from within their shell. [1]

The crabs usually hide in their shells, looking like lone boulders, and only show their appendages when some prey has come near enough to easily grab; then they rely on their two pincers to inflict wounds or snapp off body parts.[1] They are described as solitary hunters and favor to hunt solitary prey as well, using several strategies:

They don't travel much in the late autumn, as opposed to other seasons.[3] 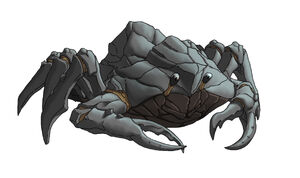 Retrieved from "https://thewanderinginn.fandom.com/wiki/Rock_Crabs?oldid=25225"
Community content is available under CC-BY-SA unless otherwise noted.