Interlude – 1.00 R
Ryoka (Ryō ka)(りょうか) Dawning Griffin, or just Ryoka Griffin, is a human, who just like Erin, was teleported to the otherworld from Earth. Her refusal of leveling up and getting a class makes her an interesting woman in the eyes of many.

Ryoka has a distinctly Asian/Japanese appearance, with long raven-black hair, bright green eyes[2] and tanned skin. She is very tall with a height of 6'1[3] and has an athletic build. She isn't wearing any shoes, as she prefers to run, or walk barefoot.[4]

When her long hair doesn't cover her ears, it becomes noticeable that her left ear had been torn in the past, as the lower part of her earlobe is missing, and the remainder had healed jaggedly around the round gap.[5] That isn't the only thing she is missing; Ryoka has also lost two fingers of her right hand.[6]

She enjoys running, and not talking to people. Her hobbies include running, hunting and sports shooting. She also attended martial arts classes since she was eight[7], achieved 4th Dan in Muay Thai but she liked Parkour even more. Growing up, she spent lots of time reading and on Youtube videos and video games.

She loves songs she can run to, a huge fan of rock and an enemy of pop, techno, and opera. Favorite artists include Meatloaf, Imagine Dragons, Fun, Lady Gaga, and Five for Fighting.[8]

She is averse to alcohol,[5] but likes coffee. She hates dogs.[9]

Ryoka was either born in New York City[10] or in Oakland, California.[3]. Either way, she considers herself a girl from Ohio.[5][11] She's half-Japanese, born to an American father and a Japanese mother. Due to little interest in the Japanese language, Ryoka can speak the language only a bit.[12] She comes from a rich family and "enjoyed" a diverse and good education; but on the same time was a problem child, antisocial and regularly aggressive towards persons of authority, including her Dad. She still hates older men, as they remind her of her father[3], who is a fairly powerful figure in both politics and business at her home.[13]

She attended many schools, including boarding schools, but wouldn't fit in there: She was kicked out of two high schools. When she was abducted from Earth, she would have been a freshman in college[5][7] and in Columbia University.[8] There, she was accepted with a Track and Field scholarship, specializing in the 400-meter run. She had a 3.89 GPA average and refused Mensa membership.

When she was teleported to the other world in October 2016[11][14], she appeared in the middle of a crowded street in a human city in northern Izril while she was out jogging; only having her wallet, her watch and her iPhone with her.[5] She decidedly wanted to avoid spilling her knowledge among the locals, so that she wouldn't influence the natives in any way. So she became a runner around the southernmost cities of the human part of Izril.

Her sudden appearance, her barefoot running and her becoming the fastest city runner around Remendia and Wales attracted the attention of several people, including Magnolia Reinhart, who tried to gather information from Ryoka but failed to even guess her homelands. That made Magnolia even more determined on interrogating Ryoka, who was severely injured after being bullied by 'fellow' runner Persua.[15] Magnolia offered her to take her to a healer, knowing that fixing the broken leg would costs hundreds of gold coins.[16] However, Ryoka had recently made the acquintance of the Horns of Hammerad, who could help her out by taking her to Liscor, where she met Ceria's former co-student Pisces. He healed Ryoka for only 40 gold coins, much less than a high-level healer would have charged for a [Restoration] spell.[8]

Ryoka has intentionally prevented herself from leveling or gaining skills. She did however take a lesson in magic from Ceria[17] and learn a basic [Light] spell, without being constrained by the need of a [Mage] class. Ryoka has since spent time trying to learn/improve magic outside of the leveling system. She has had some success with a book on magic to teach apprentices that she acquired from Teriarch,[18] but encountered a mental block,[9] as her scientific background clashed with the mentality required to learn the magic in the book. She learned the basis of faerie magic and to 'See the wind' under the guidance of the Frost Fairy Ivolethe.[19] 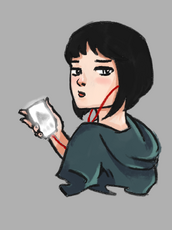 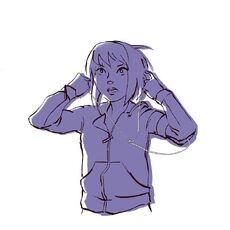 Ryoka Griffin (By Miguuel) (Zoomed In) 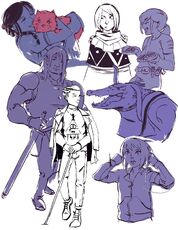 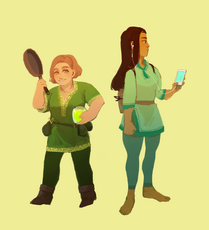 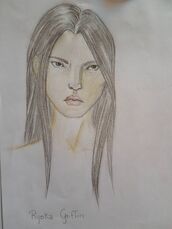 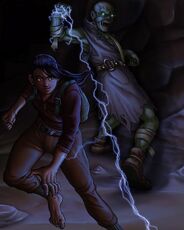 Ryoka running past the lich by DemonicCriminal 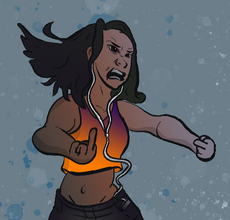 Retrieved from "https://thewanderinginn.fandom.com/wiki/Ryoka_Griffin?oldid=27073"
Community content is available under CC-BY-SA unless otherwise noted.