The Wandering Inn Wiki
Register
Don't have an account?
Sign In
Advertisement
in: Characters, Drowned People, Adventurers,
and 6 more

Chapter 2.26
Seborn Sailwinds is a Drowned Man merged with a Crustacean, and a member of the Halfseekers, a Gold-rank Adventurers team.

He is a tall, gaunt man covered in a shell across half his body. One of Seborn's arms is segmented with dark fungus and a crustacean’s pincer instead of a hand. The other one appears to lack these fish-like aspects, which allows him to hold a dagger with it.[1]

Seborn has a straightforward personality that causes him to not mince his words. While not entirely emotionless, he is deadpan most of the time, in sharp contrast with his more emotional teammates. He usually plays the straight-man, but will occasionally join in their antics. While he shares the Drowned People's dislike for pirates, he gets along with Wailant Strongheart, though was still obliged to punch him the first time they met.[2] 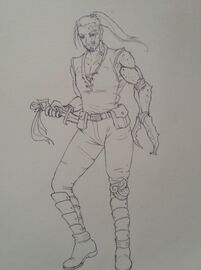 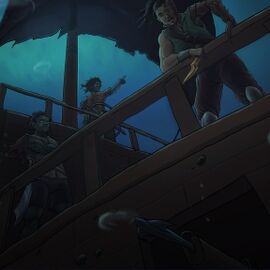 Seborn and Pirates by Demonic Criminal