The Wandering Inn Wiki
Register
Don't have an account?
Sign In
Advertisement
in: Characters, Drakes, Liscor,
and 7 more

Chapter 1.13
Selys Shivertail is a female Drake who works as a [Receptionist] in Liscor's Adventurer Guild.

Selys is a short Drake, with light green scales. She prefers to wear colorful clothes.[2]

Selys is friendly and very socially active, having lots of friends and acquaintances, including several ex-boyfriends. Among her childhood friends are Messyl[3], Drassi, Wuvisa[4], Maviss, Mica, Warsh, and Lellia.[5] Years of handling adventurers as a [Receptionist] has enabled her to be able to stand up for herself, even against figures of authority. Originally, she was embarrassed about her newfound wealth, and didn't know what to do with it; however she has since gotten used to it, though is still uncomfortable talking about it.[6]

Selys was one of the first people to befriend Erin when she came to Liscor, and is largely considered to be one of her more "normal" friends.

Her grandmother is the Guildmaster of Liscor's Adventurer’s Guild, Tekshia.[7] Another grandparent was Isshia, who is likely dead.[8]

Selys was, as of Volume 2, one of the most senior [Receptionists] of the guild, and usually busy with lots of paperwork that she dutifully tackled while dealing with the regular insanity of the adventurers around her. After becoming an [Heiress], she has largely cut back on her hours, as she has become wealthy on the income from renting out the Heartflame Breastplate.

Selys became friends with Erin Solstice because she was the first Drake to give Erin a handshake instead of a hard time. Although the pleasance of their first meeting was cut short by Terbore,[9] she later helped to stitch pads out of bandages for Erin.[10] She also was kind to Erin when Klbkch had been killed[11] and was there for Erin's first [Immortal Moment].[12] They began going shopping together[13] and travel to visit the Ruins of Liscor[14] and at some point Erin would consider her the relatable Drake receptionist to whom to go with problems or when she needed to learn more about the world she had arrived in.[15] She warned Erin not to go exploring the Floodplains alone, and was glad when Erin returned from her first trip okay.[16]

She first met Pisces on a trip to visit the inn and was not pleased that he had created Toren for Erin, which fueled their first severe argument with each other.[17] Despite that argument and her contempt for his profession, she and Zevara told Pisces to stay and fight during Skinner's Attack on Liscor.[18]

At the start of the winter season, she introduced Erin to Peslas.[8] On the same day, Toren exploded the old Inn, and Selys helped in salvaging the ruins in order to build a new inn closer to Liscor.[19] The next day she helped Erin sell hamburgers in Liscor and introduced Hawk to her.[20] She went with Erin and Ryoka to the bathhouse, showing that they were good friends already[21]; and helped Erin in preparing the Frost Faeries' banquet by teaching Toren how to extract Shield Spiders' venom.[22]

Selys played a crucial role in the rescue of Lyonette after the thieving [Princess] was exiled from Liscor: Selys couldn't be seen by the Gnolls helping the girl, so she arranged for Pisces to become a Bronze-rank adventurer in exchange for him telling Erin of the fate of Lyonette.[23] Later, when the Gnolls were boycotting Erin and Brunkr and some other Gnolls tried to attack her inn, Selys notified Zevara from within the guild where she was closely guarded by Gnolls. She also triggered the assistance of the Halfseekers.[3]

Selys starts to accept her inheritance and her new class and decides to support Krshia Silverfang with the help of Captain Zevara to turn Liscor's Council into an elected one shifting more to a democracy. 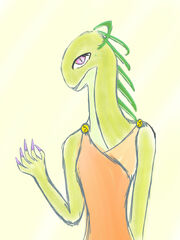 Selys asleep at work, by Saladan0