The Wandering Inn Wiki
Register
Don't have an account?
Sign In
Advertisement
in: Characters, Humans, Earthers,
and 3 more

Chapter 7.29 B
Sidney is an Earther from Canada, who was transported together with her three siblings to Innworld. She currently resides in Wistram Academy, after they had found her after rats killed her brothers and sister.

Due to her traumatic experience, she developed a fear of the dark, so intense that she is even afraid to bury her face in the clothes of someone comforting her. As such, she keeps a ball of [Light] spell at all times with her, and refused to go anywhere without it.[1] She would also develop a fear of rats to the point that just seeing even a roasted rat served as a dish will cause her to freak out.[2]

Sidney, her older sister Mamy, and her two brothers, were transported together inside some cavern tunnels where a flood of rats that attacked them. Her brothers ran , but were overtaken by the rats. Mamy hid Sidney in a hole and used her own body to protect her sister from the rats.

Sidney would faint after she had screamed and cried over Mamy's sacrifice, and when she woken up, she gain the [Survivor] Class, and with it the ability to make light. She would use the light to chase away the rats, and then ran until some kindly [Farmers] found her.

Soon after, Wistram [Mages] would find her and take her back to the academy. As she had developed a phobia of the dark, she was taken by [Light Mages] of the Orenaius faction. She would also attend Malia's therapy sessions, which would help her a bit.[1]

Sidney is first seen attending Malia's therapy session, telling the others about her traumatic experience. [High Mage] Telim overhears her story and feeling sympathetic, brought the Earthers Calming Tonics and Sleeping Draughts so that they could mix in their drinks. The following day, Telim would ask Aaron how Sidney been doing. Aaron would tell him that thanks to Sleeping Tonic and the Calming one, Sidney been feeling better and that she actually didn’t take her [Light] Wand with her this morning, soon after, she'd panicked and ran back to get it.[1]

Sidney appeared briefly with all the other Wistram’s Earthers during the first Wistram’s gathering banquest, where she freaked out and ran away after seeing a roasted rat among the items being served. Saif and Malia later brought her back, and Elena quickly put a Calming Tonic in her drink.[2] Later she is horrified from hearing Trey's experience with worms on the toilet, which reminded her of the rats.[3] When Trey tries to convince the Earthers to escape Wistram. she is among the Earthers who chooses to leave, despite her fears.[4] 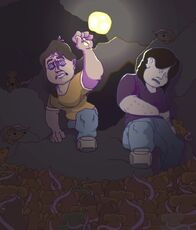 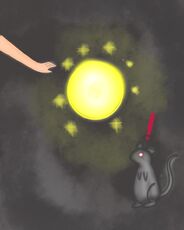