"Skinner, Skinner! He’ll eat your tails and tear off your skin! He’ll pluck out your eyeballs and devour your kin! Skinner, Skinner! Run while you can! Your flesh will be taken with a touch of his hand! Hide in the darkness, hide in the light. Fighting is useless; Skinner is fright. He takes our scales and hides our bones And makes this place our very last home. Skinner, Skinner, never open his door. Or soon your bones will lie on this floor.”

Lesser Guardian of the Crypts

Chapter 1.02 H
Skinner was a particularly old, powerful and intelligent Flesh Worm, and the Lesser Guardian of the Ruins of Liscor.

Skinner's Puppet form has the appearance of a massive bloated slug-like body that reared upright. It is layered and congealed, in dead skin and flesh, that rippled, shook and twists. It was yellowed in places, fleshy pink in others, bloody in spots, but mainly white. The skin carries the general features of the recent victims, making the imprints of their empty and vacant faces, appearing on the body.

It had no head but rather, a sunken face, with no nose, ears or hair. Just two sunken sockets filled with a crimson glow and a gaping, empty mouth. It does not have legs, but it has two massive arms, with hands wide enough to curl around any human, with long, almost delicate fingers of slick white flesh. Exposed along the palms, red flesh could be seen underneath.[1]

As a Flesh Worm, Skinner true appearance is that of dark red worm-like parasite with a segmented head, eyeless face with a fleshy mouth with sharp teeth and two long antennae made of flesh. Two long, whip-like tendrils followed the main body, long and thick roots of corded flesh. It has yellow, pus-like blood.[2]

When Skinner left his crypt, he led an army of 40.000 undead and tried with them to

Skinner has the ability to steal people's skin, ripping it from their living body, and integrates it as part of its gigantic dead flesh puppet. Appendages can be launched from its mouth to reach out and skin nearby victims as well.

Additionally, Skinner possessed two gems of terror that renders the vast majority of living beings paralyzed with fear when they look at him. 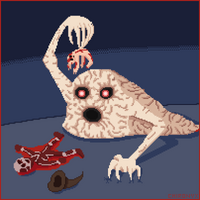 Ilustration by Brosciple of Brodin

Retrieved from "https://thewanderinginn.fandom.com/wiki/Skinner?oldid=27069"
Community content is available under CC-BY-SA unless otherwise noted.