Snow Golems are a type of Golems made of enchanted snow.

Snow Golems can range in shape and size, from the classic small snowman, to a hill-sized squat, vaguely pyramidal horror with long arms, a size of two hundred and sixty feet high and wide.

Snow Golems have a magical brain that is a core of beautifully white and unusual cold snow, usually located in the center of their heads.[1] The size and power of this snow-core probably determines how large they can grow. While the icy brains of the Snow Golems aren't capable of much thought, they still can sense trouble and feel regret.[2]

Snow Golems are created if someone builds a snowman but forgets the most important thing: clothes. Unprotected from external sources, free magic can enter the snowman and make it come to life.[1] As they consist almost solely out of snow, they are practically invisible in a snow filled area, making it very easy for them to catch their prey off-guard.[3]

Snow Golems can be found anywhere, during winter, and at this time they can get very big very fast.[4]

If a giant Snow Golems finds a city or village, it would have to be slain quickly or lured away. Otherwise the city would be destroyed.[4]

Of all the Golem species, small Snow Golems are the weakest. Even Mud Golems or Sand Golems are stronger than them. Unless they are made really ambitious, all they can do is smack you with their twig arms or throw snow mixed with ice and bits of rock. They can hit hard enough to draw blood, but they are just snow. Hardly a threat unless they smother their opponents.

Only hill-sized ones are to be avoided at all costs. Giant Snow Golems aren’t too dangerous, unless someone happens to walk past one while it isn’t moving. Then the Snow Golem would grab and swallow them whole. The stones, shards of ice, and crushing pressure of the Golem’s body grind their victims into paste quite quickly.

At a distance, though, all a giant Snow Golem can do is hurl part of itself at their opponents. That is a concern with huge ones, but they have terrible aim.[4]

Snow Golems are naturally very susceptible to heat and fire, which causes their body and eventually their brain to melt.[1]

To kill a Snow Golem more quickly, one may target their brain directly: Hacking it into pieces, tearing it apart or exposing it to warmth or sunlight is a good method of destroying it. If the Snow Golem's brain is successfully destroyed, the Golem's body itself falls apart into a small mountain of snow, no longer alive.[1][2]

A general weakness of a Snow Golem is that they are slow and giant Snow Golems have terrible aim. 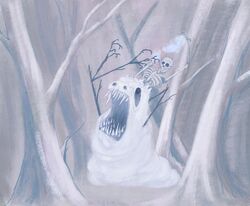 Snow Golem Vs Toren by BroscipleofBrodin]]

Retrieved from "https://thewanderinginn.fandom.com/wiki/Snow_Golems?oldid=27916"
Community content is available under CC-BY-SA unless otherwise noted.