The Wandering Inn Wiki
Register
Don't have an account?
Sign In
Advertisement
in: Characters, Garuda, Chandrar,
and 3 more

Takhatres, Lord of the Skies

Chapter 2.22 K
Takhatres is one of the Seven, thus making him one of the most loyal and powerful supporters of Flos.

As a Garuda he has a bird-man like form, with blue and green feathers mixed with light clothing and a bird’s face with a long curved beak. His ‘arms’ are two long wings with long feathers and nimble talons at each end.[1]

He speaks informally and directly to others, even to his own King, Flos. He is also stubborn and would not relent even if he ends up at a lose.

He has a strong aversion on eating eggs of any kind, due to Garuda laying eggs for birthing, and would react negatively to anyone eating egg-based dishes in his presents, even if that person is Flos himself.[2]

Before entering the service of Flos, Takhatres had been a [Cursed Outcast]. Flos removed that class with his power as a [King].[3]

Takhatres has several sons and a daughter with his wives.[1]

Takhatres returned to Flos about a week before Gazi and Mars did (on the same day).[1] He was then sent to establish a Garuda guerilla warfare against the Empire of Sands, so that it could not strike at Flos' capital Reim for three seasons. 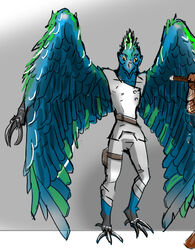 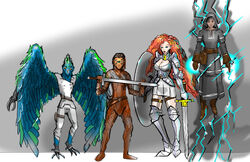 Four of the Seven by mg