The Wandering Inn Wiki
Register
Don't have an account?
Sign In
Advertisement
in: Characters, Humans, Knights,
and 5 more

Chapter 6.22 D
Talia Kallinad is a Human Lady from the Kallinad family, and a Knight of the Summer, from the Order of Seasons.

Talia has brown hair.[2] She wears gold, orange armor with hints of white, the colors of the Knights of Summer.[1]

She has fought in wars before, albeit small ones.[3]

Her favorite War-Griffin is called Amberwing, but she leaves the beast in Terandria when traveling to other continents.[4]

She participated in the games of Daquin at the request of her younger half-brother Wil Kallinad.[5]

She arrived in Riverfarm through the grand ritual together with 28 other [Knights], led by Ser Raim. Nine Seasonal [Knights] perished, but the rest of them left Riverfarm directly after Belavierr won the fight, since back in Terandria, [Knight Commander] Calirn didn't wish to declare Belavierr an enemy of the Order.

The group of [Knights] that remained then traveled Izril. While Lorell was senior to her in the group, he formed an informal leadership together with Chise, Thornst and Talia, when it came to decisions. As a group, they met the Goblin Slayer and slew a group of Ogres.[3] 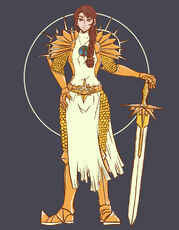 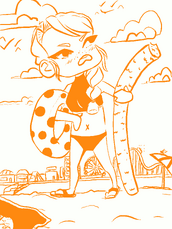 Talia on the Beach by Cortz