Chapter 1.08 R
Teriarch is an ancient Fire-type Dragon that lives in a cave located in the High Passes.

In his true form Teriarch has a height similar to that of an Airbus A380.[6] He looks like a dragon depicted in Western culture, but instead of horns on his head he has a luminous mane that looks like molten bronze turned into some kind of living hair. His scales are deep golden bronze that glow and glint in the light.[7] His eyes have mismatched colors of heliotrope and cerulean, with celestial lights shimmering within the moving pupils.[8]

In his Human form he looks like an over 6 ft tall old man well into his sixties or seventies, with a lined face and a beard like an elderly statesman,[9] with a pair of eyes that are both heliotrope and cerulean, pointed upwards ears and a veritable luster mane of silver-gray hair. His body looks like a an Olympian athlete past his prime but with the same body, with a moderate olive brown whitened skin. His clothing looked like magical robes that look like silk and shine, like it was the most expensive stuff, on par with Lady Magnolia’s attire.[10]

Teriarch knows Magnolia Reinhart since she was a girl, that is since thirty or forty years in the past if his memory serves him correctly. They didn't lose contact, but she managed to hide the secret of his existence from the world.[11]

Teriarch is a very skilled mage, with power and knowledge superior to an [Archmage]. Unlike the modern mages of Wistram, Teriarch does not categorize spells into tiers, and even seems to find the idea to be silly.[6] Regardless, if one were to categorize his spells, it is implied that he can cast at least tier 6 - 7 spells.[12]

Teriarch is capable of creating a projection that he can control over a distance. However, the greater the distance between his real body and said projection is, the less powerful spells he can cast with it. For instance, he was limited to Tier 2 spells when he was fighting at an area that is located somewhere between Celum and Liscor.[13] 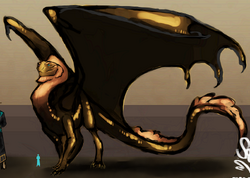 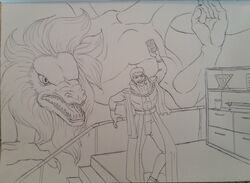 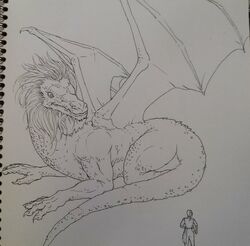 Retrieved from "https://thewanderinginn.fandom.com/wiki/Teriarch?oldid=30670"
Community content is available under CC-BY-SA unless otherwise noted.