Tersk of the Armored Antinium

Tersk is a big Antinium with a form reminiscent of a Soldier, but instead of four arms, he has two, and his hands were proper ones, outfitted with fingers instead of claws. He wears a steel plate armor that covered his entire body and a metal plated helmet. He is equipped with a shield and mace.

As of Volume 6, Tersk now also has four arms like regular Antinium soldiers. 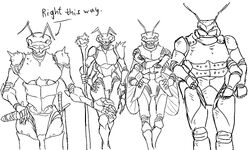 Retrieved from "https://thewanderinginn.fandom.com/wiki/Tersk?oldid=27564"
Community content is available under CC-BY-SA unless otherwise noted.