The Wandering Inn Wiki
Register
Don't have an account?
Sign In
Advertisement
in: Characters, Drakes, Adventurers,
and 3 more

Chapter 7.33 I
Tessa, mostly known only by her nickname, Shriekblade, is a young Drake Named Adventurer, one of two who currently resides in Salazsar. She is a close-quarters combat specialist, good at killing both Monsters and people.

She wears a long, tight-clinging black silk or some other high-quality clothing, which doesn't cover her gray-green scales perfectly, but is probably enchanted.[1]

An accomplished prodigy in fighting, Shriekblade is a deeply troubled Drake. Shriekblade suffers from depression that has grown worse over time, to the point of self-inflicting cuts on her self. Killing monsters doesn’t seem to improve her temperament. Only a high-level [Healer] can make her feel better, though temporarily. Failing that, she takes Calming Tonics, but they have little effect on her. She still takes them if noting else, even overdosing herself to the point of becoming completely without emotion.[1] When she's in that state, the only thing that elicits a flicker of emotion from her is the prospect of visiting the Healer of Tenbault.

To her killing people or monsters was all the same, as killing just was, for her, like taking a bath. Also when she ask if there is anyone to kill, she asks it like she wanted to know if they wanted their garden weeded. She also ignores any blood and wound, like singe marks on her.

She has a tendency of screaming in battle.[1]

She's infamous for being uncontrollable and mercenary. She's been known to switch employers for better pay.

She likes having the chance to beat up her employer without repercussion.[2]

Tessa doesn't like it when someone can detect her.[3]

She visits the Healer of Tenbault many times for her depression, and while the Healer does make her feel better, it didn’t stick, though, as after a month, she becomes worse again.[1]

TBA From Interlude – Saliss the Adventurer

She is a prodigy of an adventurer, with a close-quarters combat specialist Class, that moves like a flicker, which is similar to a [Rogue], or an [Assassin]. Despite being younger than Captain Osthia, she’d seen more combat than her. Four times over. She can also best with ease an experienced half-Elf [Weapon Master].

When she fights multiple enemies, she uses no tactics, no thought to the fight, and she doesn't gauge the situation. She just charge and plants her dagger into the first enemy, then slashed into another, becoming a whirlwind of blades. She does all of this while screaming.[1] 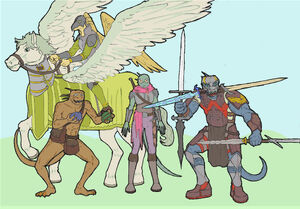