The Wandering Inn Wiki
Register
Don't have an account?
Sign In
Advertisement
in: Locations, Inns, Floodplains,
and 2 more

The Wandering Inn is the name of Erin's Inn. It is located on a hill in the Floodplains, next to Liscor.

The original Wandering Inn (see there for the building of the first volume) was located much further from Liscor than the second, newer inn, built in its first iteration by the Antinium as a newer replica of that first building, after Toren's mishap with explosive bark.

The Wandering Inn is roughly twenty minutes away from Liscor on a hill. This second inn had an outhouse, and was much closer to Liscor, providing a much more attractive location to customers. In addition, Erin now had the ability to quickly restock her supplies. The new inn also had a basement which was large enough to house all the food supplies as well as a party of adventurers. Lyonette also asked Pawn to install two more outhouses for guests with larger body sizes. [1]

Erin later hired Antinium to expand her inn further, adding a second floor and a lookout tower for Bird to stand guard.

The inn was damaged several times, for example during the Moth's Attack on Liscor and during the Goblin-Human Siege of Liscor. These damages were subsequently fixed, but Erin held off on a total refurbishment of the building that Lyonette had planned with the Antinium. Eventually, the Creler attack at the Bloodfields also had Crelers invading the Second Wandering Inn. Erin destroyed the building almost completely to destroy the Crelers, and the ruined inn came down in her fight with Toren shortly afterwards.

The third iteration of the Wandering Inn is also constructed by the Antinium at slight cost, based on the plans of Lyonette and Belgrade and funded by money given by the city and several "concerned private citizens". No longer a singular building, it is now a compound, with a main building with three floors connected to several smaller ones. The main entrance to the new building leads to a narrow pathway that doubles as a kill zone, featuring arrow slits, narrow openings for acid jars, and hidden pathdoors. After leaving Celum, Octavia relocates her shop Stitchworks to one of the common rooms of the Wandering Inn.

In the wake of Erin's death and Lyonette's departure to Oteslia, the Wandering Inn was partially closed, with most of the staff let go. In the aftermath of Belavierr, Hectval, and the Plain Eye's Doomhunters' attack, Ishkr fully closes down the Wandering Inn, with the promise that "We'll be back one day."[2]

The new inn constructed by the Antinium was built using copper nails, rather than iron nails, in order to be accommodating to the Faeries.[1] The first notable magical item that Erin got in her inn was the Magical Chessboard, gifted to her by an anonymous chess player.[3] Another one of the first notable magical items in the inn was the collection of Faerie Flowers, given as payment by the Faeries for Erin's prepared [Wondrous Fare].[4]

The inn has several more notable properties due to Erin's skills as a [Magical Innkeeper]. The most significant property is [Magical Grounds], which allows mana to naturally regenerate within the inn. This is especially helpful for the Magical Door, recovered by the Horns of Hammerad from Albez, that acts as a teleportation channel between the inn, Celum, and Pallass with other links either temporary or permanent possible. The Magical Door can be tuned by use of Mana Stones, and has since been used to teleport into the Dungeon.

As of Volume 8, six mana stones have been installed on the door, each one connected to a different door. There is one in Celum, Liscor, Pallass, Invrisil (though the Halfseekers still had to reach the city and eventually abandoned that quest), and lastly there is Numbtongue's personal door he carries around when he leaves the inn to mine.[5] A final door connects to the goblin encampment in the Unseen Empire though it is mostly unknown and generally does not have enough power to be used.[6]

The inn also benefits from Erin's [Reinforced Structure] skill. As a result, its walls are exceptionally sturdy, withstanding the majority of a major Face-Eater Moths attack. Its primary weakness is in the glass windows. The [Field of Preservation] skill allows Erin to store any kind of raw food within the inn indefinitely without going bad. The skill extends to everything in the inn, and is able to keep prepared meals, as well as corpses for Selphid use.

Since becoming home to the Players of Celum, the inn has also benefited from Erin's [Grand Theater] skill, where the first floor of the inn can expand to a very large room, holding hundreds of guests.

After Erin obtained the Garden of Sanctuary skill, the inn became connected to the garden and entrance may open up anywhere in the Inn as a safe place to retreat or enter for trusted guests. No enemy or untrusted person may enter the garden. Those with the [Druid] Class are able to enter the Garden without the owner's permission as it is a place of nature, but will lose their class if they break the sacred rules.[7]

The Inn has the rule of 'No Killing Goblins.'[8] As long as the Goblins inside or around the inn are not attacking anyone, stealing or being extremely rude, Erin won’t let anyone harm them. Currently this rule is written on a sign right in front of the inn, by the door,[9] as well as on a dozen posters all around the inn.[10]

The Inn also has the rule of 'No Killing Antinium.' It is normally right next to the 'No Killing Goblins' signs.[11]

After Palt accidentally fell on Erin,[12] and then fell again on Imani, Bezale joked about putting up a spare sign saying ‘Caution: Beware of Falling Centaurs’.[13] It is unknown if this sign has actually been hanged up or not.

Once Imani joined the staff as a full cook, she was able to create many new foods that were generally healthier or more culturally diverse such as the following: 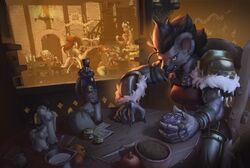 Regrika Blackpaw in the Common Room by gheeart (commissioned by Dado) 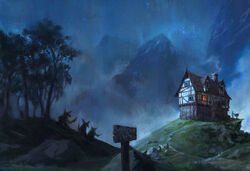 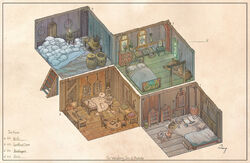 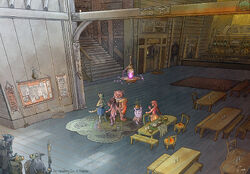 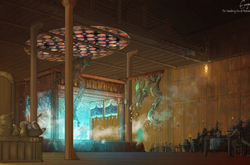 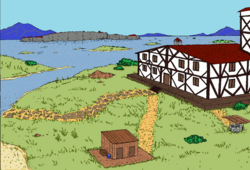 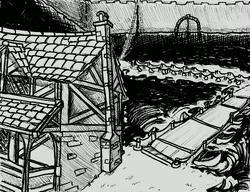 Floating bridges connections for Inn and Liscor in Spring, by Cortz 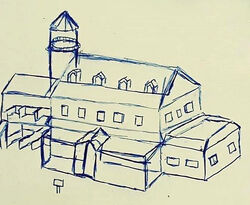 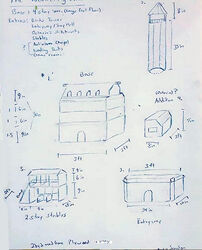 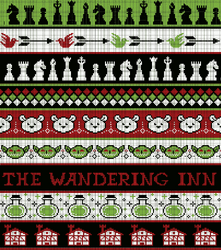