Toren is a sapient skeleton, who has slowly evolved to become more and more self-aware.

For most of the story, his main priority is always Erin's orders, though he's been known to misconstrue them for his own gain. He enjoys battle and despises the idea of being replaced.

Currently, Toren has a penchant for killing anybody that tries to order him against his will.[4]

Toren was created by Pisces, and was given to Erin, hoping that he protects her. Instead of being used as a bodyguard, as Pisces intended, Erin uses him as a barmaid, which often makes Pisces feel miserable, whenever he is reminded of it.

Toren leveled up various times due to battling with various Corusdeers, and an adventurer groups' construct, which resulted in him evolving into a Skeleton Knight.[5] After coming back from his training he discovers that Erin employed Lyonette, which resulted in him worrying about his future, as he feared he was being replaced. His relieve of learning that his fears don't seem to become true didn't last long, as Erin told him to teach Lyon. Not only is she preventing him from continuing his training in order to become strong enough to protect Erin, she revealed herself to be a huge annoyance— resulting in him beating her several times. After Erin ordered him to stop doing it, he had to think of alternatives, so he decided to poke her until she goes mad, or even going so far as to throwing her into a nest of Shield Spiders, and saved her only when she actually were about to come to harm, as Erin explicitly told him to prevent that.

Toren is able to run over 100 miles in less than a day.[6] He has the ability to sense mana, like ambient mana, and to look at something and tell where the mana was concentrated.[3] 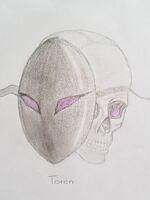 Retrieved from "https://thewanderinginn.fandom.com/wiki/Toren?oldid=23594"
Community content is available under CC-BY-SA unless otherwise noted.