The Wandering Inn Wiki
Register
Don't have an account?
Sign In
Advertisement
in: Characters, Goblins, Hobgoblins,
and 5 more

Chapter 3.28 G
Ulvama was the [Chief Shaman] of the Mountain City Tribe and its strongest [Shaman]. After Tremborag's death, she joined the Flooded Waters Tribe.

Ulvama is a very attractive Goblin, even by non-Goblin standards. She rarely wears clothing, covering her body with paint.

Ulvama is shown to be mostly self-centered and power-hungry, willing to seduce people who are useful to her to make them give her what she desires.[1] However, she possesses a softer side, mostly to children like Pebblesnatch and Mrsha. Though she can speak the common language fluently, she often pretends to speak stiltedly to make others underestimate her.

Ulvama was born from a Goblin mother and a Human father.[2]

Ulvama is amongst the 6 [Shamans] in Tremborag's tribe the strongest one which is shown by her being the chief shaman of the tribe.

Looking at her basic magic capabilities one wouldn't find anything noteworthy, but considering that she is a [Shaman] of a major tribe, consisting of tens of thousands of Goblins, her abilities improve immensely.[3] However, while she possesses great magical abilities, she is lacking a powerful body, thus allowing even Rags with her few levels in her [Warrior] class to overwhelm her in close combat.

All following artwork was originally posted in a special discord gallery. 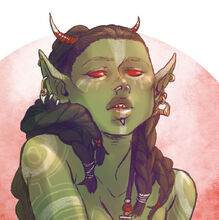 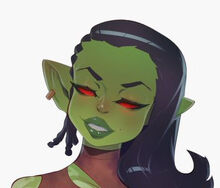 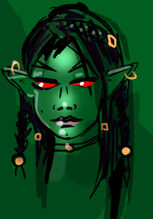 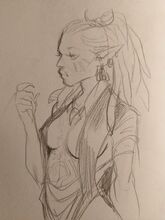