The Wandering Inn Wiki
Register
Don't have an account?
Sign In
Advertisement
in: Characters, Humans, Pirates,
and 2 more

Chapter 4.17
Wailant Strongheart is Garia's father and Viceria's husband. He used to be a [Pirate], until he retired and became a [Farmer].

He has black hair, green eyes and a stubble face, with a particularly circular scar on one side of his jaw and 2 silver teeth, and skin a few shades darker than normal.[1][2]

He has a number of colorful tattoos made of Magical ink on his body, that varied between lewd and impressive.[2] Some of the tattoos consists of:

He also has savage scars that covered his muscular arms.[1]

He wears a high quality sleeveless cotton shirt, that is a light blue gilded with gold and a flowing edge around the bottom and sides reminiscent of a golden wave.[1]

Wailant comes from a family of [Pirates], that originated from Baleros. It’s in the blood, not that he knew them, as his father died at sea before he was born and his mother died in a battle when he was five. He also has two brothers and a sister, but can’t tell where they are. He learned to fight and got his share of the plunder as soon as he could use a sword.

He’d sailed across the world, to all five continents, under a ruthless [Pirate Captain], taken down enemy ships, fighting in the worst storms against monsters, even battled with a group of Gold-rank adventurers who’d been after his ship and literally seeing a Kraken and walked away.

Out there in the depths of the sea, he could have become a [Storm Sailor], or a [Captain] of his own ship had he wanted to. But he hadn’t stayed at sea like the rest of his crew, as he chose land instead. He’d been a Level 27 [Pirate] when he quit sailing for good and found an honest ship headed for Izril. Not because he’d lost his ship or run into any bad luck either, but because he got sick of rocking ships, the damp, salt in his hair and thousands of glowing eyes watching him from the waters on bad nights.

He’d retired as wealthy as any Gold-rank adventurer, but the vast amount of his fortune went to clearing the bounty on his head. What he had left he used to buy a farm, and then to pay for food and supplies for the first few years before he leveled up enough to make a living with his own hands. He bought it far inland because he was sick of seeing water, and because he had more than a few enemies who would like to see him dead. He thought a farm would be nice and relaxing—and it was, after he learned how to manage it. The first few years had not been kind to him, but he’d persevered, not shying from the work.

He couldn’t figure out how to make the oxen plough a straight line for months, but he had his advantages as he didn’t have to stick together in a village, afraid of monsters at night. If a band of Goblins came roaming around, or a Creler tried to dig a nest in his lands, he’d kill it with his cutlass that shimmering with an enchantment that he apparently kept with him while farming at all times. He’d had looted it as his share of treasure long ago, and it had saved his life more than once on the farm.

It’s also how he met Viceria. She was a Wistram graduate, trying to study the Blood Fields when she ran into a group of Carn Wolves. He found her escort dead and killed two of the Carn Wolves before the pack ran off. She and he got to talking, hit it off, married and than had their daughter, Garia.

As a [Farmer], neither he nor his wife were specialists in the [Farmer] class like the Level 30 [Farmers] who could supply an entire city with produce, but they had their own skillsets that helped a great deal. As most farms, would need two dozen farmhands just to harvest and guards and so on, and even a high-level [Farmer] has to be wary of bandits and monsters, he didn't have those issues, and his wife has the spells to grow crops faster than normal, that was as good as a Skill.

Between the two of them, they could supply a good deal of produce for Celum. Enough to live comfortably on and he can always hire a few brats to take in the harvest when it comes time for it. Besides, the farming life’s was fairly quiet, and he enjoy not fighting for his life every other day.[1] 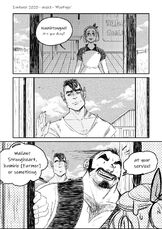