The Wandering Inn Wiki
Register
Don't have an account?
Sign In
Advertisement
in: Characters, Humans, Mages,
and 7 more

Chapter 4.20 E
Wiskeria is a [Witch] and a Silver-rank adventurer. A former member of the Celestial Trackers, she now serves as a [General], under Emperor Laken Godart.

She is a young woman with dark hair and yellowish green eyes.[2] She wears glasses[3] and a pointed hat.[4]

Her voice is quiet, smooth, and precise, giving off the impression that she has had some kind of formal education.[5]

Wiskeria is a sensible, intelligent young woman, which is in itself somewhat unnerving, given that she was raised by an terrifying, immortal [Witch]. She has a good sense of judgement and a keen sense of right and wrong.

A dark blue pointed hat, sewn by Belavierr. It was made when a tearful six year old Wiskeria was afraid of being lost and not finding her mother, who could be forgetful. So a Tracking Enchantment was put on it while being sewn, and ever since that day, Wiskeria had never been lost again.[6] It has 5 known enchantments that presumable work only for Wiskeria by using Belavierr magic; 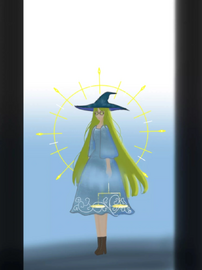 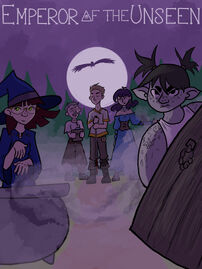 Emperor of the Unseen by Jack Enza. From Left to Right: Wiskeria, Prost, Laken, Rie and Durene. 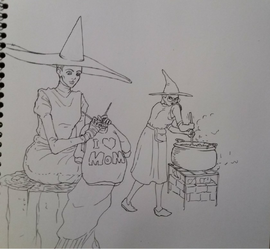 Belavierr and Wiskeria by Demonic Criminal