Chapter 4.13 L
Yellow Splatters is a Painted Antinium Soldier that belongs to Liscor's Antinium hive. He was promoted to be a [Sergeant] prior to Pawn's second command.

He is built like every other Antinium soldier. However, he has yellow splatters of paint all over his carapace.

Yellow Splatters was first noticed by a Drake grandmother while on patrol in Liscor. He was on one of the first patrols Pawn had led, and had been on several patrols since. He was the first Antinium to demonstrate use of a skill while fighting a group of Shield Spiders.[1]

Prior to Pawn's second battle in the Hive, Yellow Splatters was selected by Pawn to be the Sergeant of Pawn's unit.[2] This changed his class from [Soldier] to [Sergeant] and caused him to grow a tiny amount.

Yellow Splatters almost becomes an Aberration when the hive temporarily pushes the dungeon monsters back, and nearly kills Purple Smile. This occurs because the other Antinium don't initially inform Yellow Splatters about their plans to create traps and fortifications, so Yellow Splatters thinks they are needlessly sacrificing Antinium.

During the Battle of Liscor, Pawn convinces Yellow Splatters and one hundred other Painted Antinium to follow him and help save Erin. This marks the first known time any non-Aberation Antinium directly disobey an order from the Free Queen. In the battle, Yellow Splatters dies. Pawn does not want him to be brought back with the Rite of Anastes, but Klbtch does. Anand and Belgrad decide that he should be brought back.

During the Liscor Election Arc, Yellow Splatters is revealed to have successfully undergone the Rite of Anastes and is presented as a hero of the battle. He comes back in a new body with yellow splatters a part of his body instead of paint and the ability to speak. His voice is noted to be that of a leader. He tells Pawn that he has seen Heaven, but it is small and fragile.

Yellow Splatters and Numbtongue bond over the battle of Liscor and being outcasts from regular Liscoran society after Numbtongue saves one of Yellow Splatter's [Soldiers]. Numbtongue teaches Yellow Splatters about several Redfang traps and tells him how potions would help mitigate many Antinium weaknesses. This causes the pair to go to Octavia's shop in Celum, where they defend the Alchemist shop from [Thugs].

Yellow Splatters and Anand receive some Progunator training from Klbtch. This involves them both commanding excess Antinium in battle against the Dungeon. Klbtch's disregard for regular Antinium lives angers Yellow Splatters. 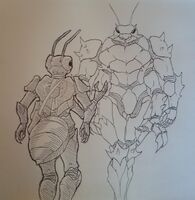 Pawn and Yellow Splatters by DemonicCriminal 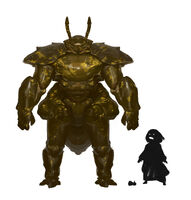 Retrieved from "https://thewanderinginn.fandom.com/wiki/Yellow_Splatters?oldid=30956"
Community content is available under CC-BY-SA unless otherwise noted.