The Wandering Inn Wiki
Register
Don't have an account?
Sign In
Advertisement
in: Characters, String People, Queens,
and 6 more

Her body is sewn with Kisquiel Silk which gives her a glorious, bronzed[1] to light brown skin, which is softer than it should have been possible, and flawless flowing black hair. Her eyes spark like brilliant emeralds, and her features are perfect down to the line of her nose, to her lips. She also moves like she is dancing at every moment, and a radiant aura.[2]

She represented her kingdom at the Conference of Pomle and maintaned a neutral stance towards Flos.[3]

She didn't participate in the subsequent war against Tiqr herself, but sent her General Thelican. She ordered him to imprison Empress Nsiia so that she could keep her as a slave, but Nsiia ended up surrendering to Femithain of Illivere.[4]

Every week, under her pen-name of ‘Sandquen’, Yisame has been sending letters to ‘Heartslayi’ (Caroline) to insult her about the bad taste romance stories that she writs.[5] (From 8.43) 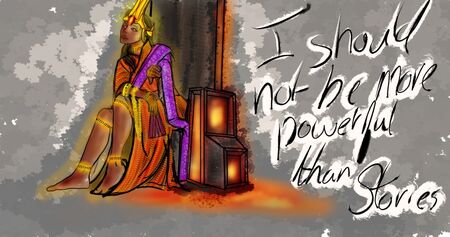