Yvlon is tall, gorgeous woman,[1] with long flowing golden hair,[2] fair skin, great teeth, a shapely nose, and nice ears. She has the faintest trace of a horrible scar across her left face.[3] Her right arm has melded with armor. 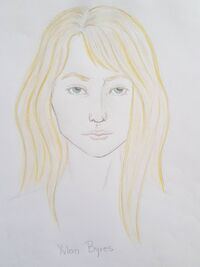