The Wandering Inn Wiki
Register
Don't have an account?
Sign In
Advertisement
in: Characters, Drakes, Generals,
and 6 more

Chapter 2.29
Zel Shivertail, also known as the Tidebreaker, was one of the best defensive generals on Izril, and the hero of two Antinium Wars.

Zel had a huge, muscular body (though he wasn't as thickly built as Relc) with green scales that were tinted a bit grey.[1]

He had an aura that projected something solid that made him hard to ignore, or forget.

Zel Shivertail was a seasoned military leader and largely considered to be the greatest Drake [General] of his time. On the battlefield, he was a great fighter, leader and tactician. Despite his reputation, Zel was warm and friendly in person. He didn't display typical Drake prejudices against other species, though he possessed a dislike of Goblins and Antinium. Despite that, he was willing to give advice to Pawn and Belgrade. While he was estranged from most of his family, he was close with Tekshia and Selys, despite not seeing them often. Despite his fame, or rather because of it, Zel did not enjoy being the center of attention, preferring to be around non-Drakes as they usually didn't know who he was.[2] However, he still felt the need to be the symbol for the Drakes.[3]

Zel Shivertail was a hero of the commonfolk living in the Walled Cities. Originally a level 15 [Lieutenant], he surprised the continent by surviving when the city of Geir was overrun by the Antinium. He and three hundred warriors and civilians fled into the city dungeon where they held out and grew stronger by constantly leveling up. Eventually they were strong enough to push the Antinium out of the dungeon and escape. As their leader, Zel cemented his rank as a hero — a commoner born from nothing, yet achieving what no-one else had done.

In the process, he became one of the most renowned [Generals] on the continent. Even Niers Astoragon thought of him in praise.

During the 1st Antinium War, more than 10 years ago, he grew from a Level 15 [Lieutenant] to a Level 39 [General] after his battles; one of the most incredible growths ever recorded in known history. Shivertail became hailed as ‘Tidebreaker’, in reference to the Black Tide’s failure to overwhelm his army time and time again.[4] Zel killed two Centenium that Klbkch considered to be friends[5] (Rehab and Mellika[6]).

In the year of Erin's arrival, Zel was the [General] for the Trisstral Alliance in their dispute with Salazsar. He won the war decisevely and captured Wall Lord Ilvriss Gemscale after overrunning his forces.[7]

He was then surprised by the emerging Goblin Lord and retreated to Liscor where he stayed for a while, before being hired by Magnolia Reinhart to fight the Goblin Lord near Invrisil. He thus was the first Drake [General] to go north past Liscor to Esthelm,[8] and then further north, since the last Antinium War.[9] In Northern Izril, he lead Magnolia's coalition of human forces. There, Zel succumbed to a surprise attack by Az'kerash and his Chosen.

His death caused a shock in the Drake communities all over Izril. One of his last possessions was the Heartflame Breastplate, that was inherited by his niece Selys.

Zel's personal abilities gave him the strength equivalent to a Named Adventurer. He possessed razor-sharp claws, capable of cutting through even the carapaces of Antinium Soldiers.[10]

As a defensive [General], he was not suited for offense, but for defending to hold the line. Occasionally he could charge into the enemy and redefine the line, but he was best suited defending.[11]

While he never rode horses when fighting, he was still a competent rider.[12] 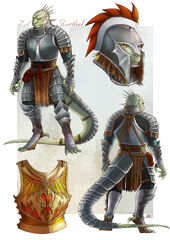 Zel with the Heartflame Breastplate, By Artsy Nada 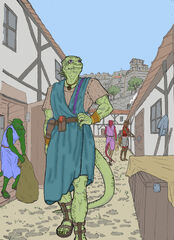 Zel walking in a city, by Demonic Criminal 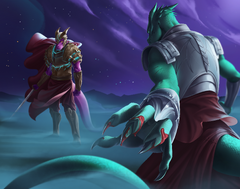 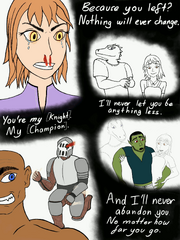