The Wandering Inn Wiki
Register
Don't have an account?
Sign In
Advertisement
in: Characters, Drakes, Liscor,
and 5 more

Zevara Sunderscale, is an Oldblood Drake and the Watch Captain of Liscor's City Watch, charged with the protection of the City.

She is tall,[1] has a scar on the left side of her face, has light blue scales, and either yellow[2] or light purple eyes.[3]

Erin met her the first time after the death of Klbkch, which was reason for Zevara to retract any protection from the Wandering Inn.[5]

Zevara was then seen again in Skinner's Attack on Liscor, when she led the scrambled defense after the Undead had already invaded the city. Her duty to protect the city let her stop Relc going after Skinner and fight Undead in the city even after Skinner had left for the Wandering Inn.[6] Zevara then met Erin again in a debrief at the Old Wandering Inn after the attack.[7]

Just the next day, Zevara faced Erin and Ryoka after they had exited from the Ruins of Liscor with a rescued Ceria and Olesm. Her intention was to use their knowledge to loot and secure the ruins. She is at first still opposed to helping the surviving adventurers, but reluctantly offers help when she discovers that Olesm had joined their expedition and survived. However, the appearance of Gazi changed the entire encounter. Gazi starts a fight with everyone present by stabbing Zevara and was only defeated after being distracted with the news of the King of Destruction's awakening.[8]

Three days later, when Erin was loudly yelling for Toren as she had lost her skeleton during the explosion and rebuilding of her inn just outside Zevara's jurisdiction, Zevara stepped in and told the noisy human to shut up.[9]

Two days later, Zevara's authority was challenged again by the iPhone festival happening at the Wandering Inn, where she couldn't prevent the singing and dancing.[10]

After Krshia captured Lyonette, it was decided that the human thief would be exiled instead of being executed. While Zevara was clearly involved in this decision, it was not shown directly and the political nature of the event meant that it also involved the enraged Gnoll community and the City Council.[11]

Not many days later, Zevara had to break up a fight between Erin and her patrons, the Gnolls and two gold-rank adventuring teams at the Wandering Inn.[12]

She is able to breathe fire, due to her ancestral dragon blood as an Oldblood Drake. She cannot use the ability unlimited like a dragon would. Every time she uses it she feels as though she is suffocating. A couple of times is the most she can do before she would likely die, due to lack of oxygen.[6][12]

Zevara begins the story being able to project a presence of being busy or hostile[13], as well as authority, despite not having any form of Aura skill.[14]

Zevara doesn't have a [Loud Voice] skill, and regrets not having that Skill.[12] She can make do with spells or items if she has time to prepare.[9] 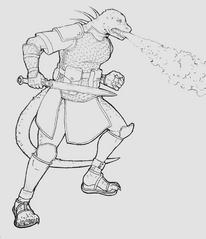 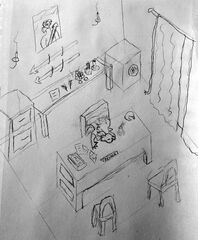 Zevara asleep at work, by Saladan0